Anesthesia Exposure Will Make You A Bad Parent 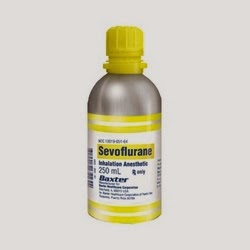 At least that appears to be the case in laboratory mice. In this month's issue of Anesthesiology, researchers from Japan published a paper detailing their experience after giving six day old mice sevoflurane for six hours. Previous studies had demonstrated increased rates of neuronal deaths in young brains that have been exposed to general anesthesia.

After 7-9 weeks, the mice were then mated to other healthy mice and the resultant parental behaviors toward the new offsprings were documented. The results gave a rather stark demonstration of the latent effects of anesthesia on brain function. The control mice cared and fed their brood normally while the mice that were given sevoflurane showed a severe lack of maternal instincts. While 80% of the pups from the controls were well fed, only about 40% of the pups from sevo exposed mothers were fed.

The nesting instincts were also severely impaired. When the pups were randomly scattered around the cage, the control mice would retrieve all of them back to a central nest so they could be fed and kept warm. By contrast, the sevo mice took a much longer time to bring back the pups, frequently leaving them exposed throughout the bottom of the cage.

Consequently, as one can imagine, the survival of the pups were much different between the two groups. The pups from the control mice had an 80% rate of survival after 6 days. The sevo exposed mice had half of their pups die after only 2 days.

To test whether the effects of sevoflurane on maternal instincts can happen to adult mice, the researchers gave the anesthetic to mice who had just delivered one litter of pups. They found that the offsprings from subsequent pregnancies had no significant difference in care or survival compared to the controls. Thus it seems that sevo only made its impact on developing brains, not mature ones.

This study raises the potentially alarming question of the use of sevoflurane in human brain development. The anesthetic was first approved for use in the early 1990's. It quickly became the standard for inhalational induction in pediatric patients due to its rapid onset and low airway irritability. Many of those children are now young adults and of child bearing age. It will be interesting to follow up on the patients who received sevo for surgery twenty years ago and test them for their parenting skills and their children's developments. Will we see a surge of poorly raised or abandoned children in society? Only time will tell.
Posted by ZMD at 9:40 PM