The HP iPAQ. That Is Not A Typo 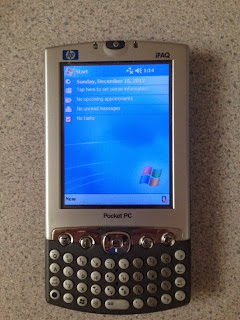 Recently I was cleaning out my old electronics drawer (every guy has an old electronics drawer full of stuff that he can't bear to discard) and I came across an old device that I hadn't given a second thought to in years, my old HP iPAQ powered by Microsoft's Pocket PC. This was HP's answer to the successful Palm Pilot and a precursor of the iPhone and iPad. I'm surprised HP never sued Apple for trademark infringement.

Out of curiosity I juiced up its removable battery overnight then powered it on. After a couple of minutes when nothing happened and I thought the machine was truly dead, the screan turned on. Oh the memories started flooding back. When I had this thing in the early 2000's, it was the cooliest device around. While others were merely carrying around iPods that could only play music, my iPAQ could play MP3's, surf the internet, send emails, and do pretty much anything a Windows desktop can do. Microsoft even included Pocket PC versions of Excel and Word, a marketing strategy that it continued when it introduced Windows RT tablets last year. 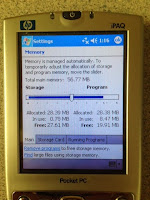 And just like Windows RT, the Pocket PC operating system is a memory hog. The iPAQ comes with less than 64 MB of memory. That's right, MEGABYTES. Only power users using desktop workstations had access to gigabytes of memory at that time. MS was able to squeeze in a minimized version of its desktop OS but only by consuming nearly half of the machine's memory. Luckily, unlike an iPad, the iPAQ has an SD card slot at the top. I tried inserting a 32 GB card but it wasn't recognized. But when I put in a 512 MB card, it read it right away. It seems ludicrous nowadays that a 512 MB memory card can be useful for anything. But that will hold about 100 MP3 songs which was far better than toting around a bunch of CD's and a CD player that some anesthesiologists had to use at that time.

After playing around with it awhile, I remembered why I stopped using the iPAQ. First of all, this version did not include cellular functions so it was basically just a PDA. Other versions of the iPAQ did have cell phone functions though. Then its ability to subsitute for an iPod was severely compromised by a loose headphone port. I have to fiddle with the headphone jack for it to seat properly in the port and then it will only play out of one speaker instead of stereo. Finally the data port on the bottom broke loose, making it impossible to charge and sync information directly. I can exchange information by swapping out the SD card and I can charge the battery with the separate battery charger but it is a pain. Removing the battery to recharge it erases all the previous settings and I have to start all over again when I turn it back on.

So there you go, a report on everything you've always wanted to know about a ten year old HP iPAQ. It was far more functional than the old Palms and Apple Newtons. With its touch enabled color screen and included stylus, internet connection, Bluetooth capability, media player, and functional versions of Word and Excel, it seemed like it was an inspiration for the iPhone which would be introduced in just a few years. The iPAQ was truly ahead of its time. 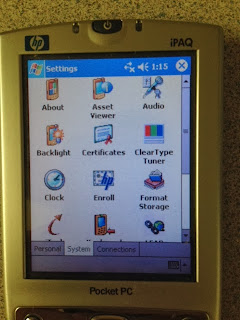 Email ThisBlogThis!Share to TwitterShare to FacebookShare to Pinterest
Labels: iPAQ