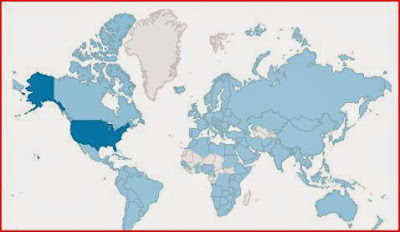 It's hard to believe, but my humble little anesthesia blog has just surpassed 500,000 page views. Though that is pretty puny by Amazon, Google, or Facebook standards, it still blows me away that that many people are seeking some sort of information about anesthesia and anesthesiology. As you can see on the map above, virtually every country in the past four and a half years has visited this blog at least once. The only exceptions are the dictatorship of North Korea, who keeps virtually all of its citizens in a technology blackout, and the impoverished nations of sub-Sahara Africa and central Asia.

When I first started this blog on a lark back in July, 2009, it was in response to all of the negative news about anesthesia that was circulating in the media after the death of Michael Jackson at the hands of his pseudo doctor Conrad Murray. I felt that somebody with actual knowledge of anesthesia should have a say about how our drugs are actually supposed to work in the hands of competent and well trained physicians. Since then, I have ventured far and wide in the subjects that I have cared for and written about, everything from food, to humor, to money. Sounds a little like Maxim without the hot models on the homepage.

Ironically, the most popular post I have ever written isn't even about anesthesiology. It was a simple observation that I have frequently made in the operating room. Titled "The Dirtiest Part Of The Body," it has consistently garnered the most views month after month since shortly after it was published in June, 2012. I had no idea there were thousands of people who sat around and wondered which part of their anatomy was the most disgusting.

The second most frequently visited post is a little autobiographical essay that I wrote called, "Why I Chose Anesthesiology." I started that piece to help students and residents decide what they want to do with their lives. As anybody who has ever trained students know, one of the most common questions that is asked is why somebody decided to go into a certain medical field. Everybody has a different explanation but I thought writing this on a blog would disseminate the information more widely. And I was right. I get lots of correspondence from students asking for more information after they have read that article. From there, it turned into a series of posts that chronicled my struggles through residency and its eventual happy ending. I have received many emails complimenting me for my candid story of how difficult choosing the correct residency can be.

So I hope all you readers have enjoyed following me through the years as I've written about medicine, politics, money, and whatever I felt was worth an hour of my time to sit down and write. Thanks to all of you for keeping this blog going for all these years. There is nothing that motivates us blog writers more than the occasional reader comments, whether critical or appreciative. Nothing will drive a blog quicker to its death than apathy. I look forward to hearing from you readers as this blog rolls on into the new year.

1. The Dirtiest Part Of The Body

2. Why I Chose Anesthesiology

3. How To Get Into An Anesthesiology Residency

6. Surgery, A Siren That Will Break Your Heart And Crush Your Soul

7. The Easy Way To Decide What Kind Of Doctor To Be

9. Why Is The Operating Room So Damn Cold?

10. Stress Of Being An Anesthesiologist
Posted by ZMD at 11:36 PM