"I was all for Obamacare until I found out I was paying for it." 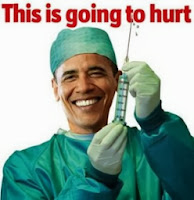 That is the lament of one shocked insurance buyer featured in a page one article in the LA Times today. The Obamacare advocacy newspaper is just now coming around to reporting on the financial penalties imposed on people due to the new insurance plans. As it turns out, President Obama's statement that people can keep their health insurance plans if they like it was not passed on to the insurance companies who actually have to sell their plans.

The ACA has forced insurance companies to cancel plans by the thousands because they don't comply with the requirements of the new law. Things like mammograms, contraceptives, and mental health coverage are suddenly being thrust upon people whether they need it or not. Therefore the companies cancel their old plans and force consumers to buy the new ACA compliant plans that may cost them 50% more than what they pay now. Naturally this comes as quite a sticker shock to gullible consumers who believed everything their government told them.

Another one of the President's lies that has now been exposed is that you can keep your doctor if you want to. In order to prevent the premiums from rising even higher, the health insurance industry has significantly narrowed the networks of hospitals and doctors that patients can use under the new plans.

You say that your company provides health insurance for you so you can't empathize with the poor schlubs who have to buy their own health insurance on the new exchanges? Well guess what--that corporate protection might not last much longer. Major corporations are realizing that it is easier to dump their employees onto the insurance exchanges with a small subsidy than it is to keep providing insurance ad infinitum. Or if fate is particularly frowning upon you this year, they may decide to cut back on your hours to part time status so that they have no obligation to provide you with any insurance at all. That's all perfectly legal according to President Obama.

All these changes should really be called the new Obamacare tax that has been subversively thrust upon the American people. They may not call it a tax, and the Supreme Court tried very hard not to defeat Obamacare based on tax clauses, but if you have to pay more money due to a government mandate, it is a tax. During the Congressional debates prior to its passage, there were impassioned arguments from our representatives that it's just not fair the top 1% are taking all their wealth and leaving the other 99% behind. They have to pay for their financial success, which obviously couldn't come from hard work and sacrifice. So let's just raise their taxes to help pay for health insurance for everybody. Everybody else can get free or subsidized health insurance and it won't cost them one bit. Ha ha! The voters have been fooled again.

Everybody is all for universal health insurance coverage, until they have to pay for it as the LA Times found out. While we haven't raised our taxes to the levels found in Europe that are necessary to provide health coverage for everybody, these forced payments on higher insurance premiums for lesser coverage is just another name for a new government tax. But all these people who voted overwhelmingly for Obama twice knew what they were getting when they elected a tax and spend liberal Democrat to the presidency, right?
Posted by ZMD at 11:52 AM