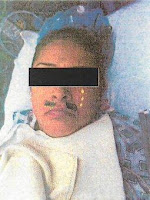 From the "WTF was the anesthesiologist thinking?" department. An anesthesiologist decorated a patient's face with colored stickers while the patient was asleep. He then had a nurse's aide take a picture with his cell phone. The photo may or may not have then been posted online depending on who was asked.

In October 2011, Dr. Patrick Yang, an anesthesiologist at Torrance Memorial Medical Center was giving sedation to Veronica Valdez, an employee of the hospital, for a hand procedure. Before the patient woke up, he placed black mustache stickers and yellow tear drop stickers on her face and had Patricia Gomez, the aide, take a picture. Later, when the patient was awake the aide showed her the photo.

As you can imagine, Ms. Valdez was none too pleased. She filed a civil lawsuit for breach of privacy and emotional distress. Ms. Gomez claims she deleted the picture right after showing it to Ms. Valdez. Several people have testified in court that they saw the picture on the internet. Ms. Valdez resigned from the hospital after working there 13 years because she felt completely humiliated. Dr. Yang was suspended from his practice for two weeks but is still currently working there. Ms. Gomez was also suspended briefly before returning to work. The lawsuit is still ongoing.

While the gross violation of patient privacy is bad enough, I bet that Dr. Yang felt comfortable taking this picture because he knew Ms. Valdez well. He would know better than to do this stupid act on a total stranger he had just met in preop for ten minutes before surgery. Both people had been working at the hospital for over a decade. Whenever a hospital employee has surgery, he or she usually chooses the surgeon and anesthesiologist they know best and arrange to have the procedure done by them. As an anesthesiologist, whenever I am asked by a hospital employee to personally administer to them the anesthetic, I feel extremely honored and gratified and feel tremendous pressure to do my best job possible. So besides being a breach of privacy, this also most likely led to a loss of friendship and respect between Ms. Valdez and Dr. Yang.

As a doctor you live and die by your reputation. That really is the only thing patients know about you. They could care less that you were AOA president or served as secretary of the state medical society. If they hear good things about your work, they will choose you. Nothing in your C.V. will matter more than what people say about your competence on the job. What a shame two hospital careers have been marred by this imbecilic action.

Just as an aside, where was the surgeon when all this was happening?
Posted by ZMD at 11:43 PM