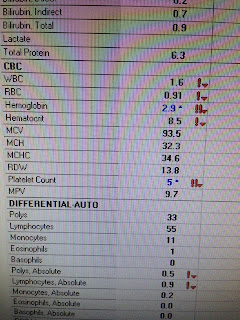 This is the scariest CBC result I have ever seen. I didn't think it was even possible for somebody to be alive with a hemoglobin that low. Usually they would have succumbed to the lack of oxygen carrying capacity in the blood before this.

The labs were from a patient who came in with GI bleed. Before you say that the blood sample was drawn from a vein above an IV site, which can dilute the blood and give you dramatically low readings, the patient was transfused three units of PRBC and his hemoglobin almost reached 6. Still less than half of a normal hemoglobin level but at least somewhat above fingernail biting, sphinter releasing stage. So this result is true.

I'm frequently amazed by how much redundant functional capacity our bodies contain to overcome adverse events. Anemia, renal insufficiency, liver failure. The list goes on and on. We are endowed with so much more than what we need to survive it's a wonder anybody ever gets sick or dies. Virtually all our organs have to have reductions of at least 50% before we start feeling the consequences. People do well with only one kidney or one lung. You need to remove at least two thirds of the small bowel to suffer malabsorption. And you can live very well, if uncomfortably, with no colon at all. You need to lose about half of your cardiac output before you start getting symptoms of failure. And you can definitely survive without any brain function, though by then you're not really considered "human" anymore and are considered brain dead.

So whatever your beliefs, thank your maker for how resilient the human body is. We wouldn't have the capacity to destroy our planet if it wasn't for our ability to survive through virtually any adversity.
Posted by ZMD at 11:05 PM