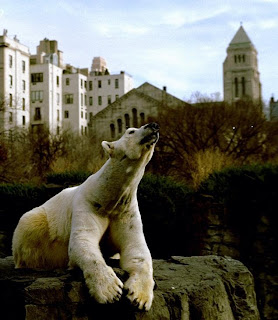 Sad news out of New York City today. Gus, the celebrity polar bear at the Central Park Zoo, was euthanized yesterday. Zookeepers had noticed that his appetite was not as healthy as it used to be. When zoo veterinarians went to examine him, instead of a bad tooth that they had expected, they discovered that he had inoperable thyroid cancer. Rather than allowing him to suffer, they decided that Gus should have a dignified death before he suffered from his terminal illness.

What a refreshing attitude. We can learn so much from how Gus was allowed to exit this Earth while still relatively healthy and in comfort. Instead of watching an old dying bear suffer from treatments that would only prolong his misery, the zoo did the right thing and allowed him to die gracefully so that we can still reminisce about what a wonderful bear he was and how much happiness he brought to the world.

Why can't we do the same with our fellow human beings? All too often patients with end stage disease are almost forced to linger on through their misery. Various tubes are inserted into nearly every single external orifice of the body. If that isn't enough, we iatrogenically create new ones. I've seen countless patients who are demented, emaciated, contracted, and end stage with no hope of ever recovering a meaningful existence get brought to the hospital for a gastrostomy tube placement. Why? Is it really more humane to force feed this moribund person than to allow him to pass away peacefully with a morphine drip?

Our ICU's are filled with patients who only exist because of machines. They have mechanical support for their respiratory, kidney, and cardiac functions. Their blood pressures are supported by multiple chemical agents. The hematologic functions are boosted by frequent transfusions. When the body tries to take its natural course into oblivion, we hurriedly rush them off to the CT scanner or the operating room, hoping desperately to maintain a pulse on an otherwise inanimate lump of carbon tissue.

We should all consider the legacy of Gus the polar bear and what he can teach us about humanity. Our last memories of our loved ones should be of the times when they brought vibrancy and joy to our lives. We shouldn't have to hold out desperately for a miracle treatment that may prolong life by an extra two months according to some drug company sponsored study. When we make medical decisions based on the uneducated wants of family members and fear of lawsuits, we aren't serving the most important person on our service, the patient.
Posted by ZMD at 12:04 AM

Email ThisBlogThis!Share to TwitterShare to FacebookShare to Pinterest
Labels: euthanasia