Sometimes I Wish I Can Stop Learning New Things 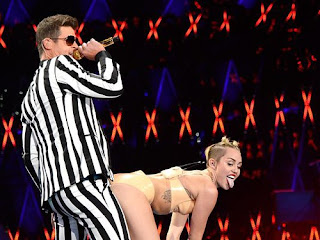 Twerking. That is a term that I had never heard of before last weekend but it must be the hottest buzzword in the news today. After Miley Cyrus's scandalous dance routines at the MTV Video Music Awards program last Sunday, that's all anybody is talking about. Even normally staid reporters at respectable publications are talking about twerking. When did non entertainment reporters suddenly get so hip?

The Urban Dictionary defines twerking as, "When a woman slams her bottom on a man's pelvic area while dancing." In my youthful days, it was known as dirty dancing or grinding. But somehow the act appears far more outrageous today. When Patrick Swayze and Jennifer Grey were gyrating their hips in "Dirty Dancing" in 1987, it didn't feel like you needed to take a shower after watching the movie.

Perhaps I'm just getting old. When Madonna sang "Like A Virgin" at the VMA's in 1984 in a white wedding dress and rolled around the floor moaning, I thought it was entertaining but hardly earth shattering. But I was merely a teenager then. However its shock value to adults in the audience has transcended time and is now mentioned as one of the signature events in the history of the VMA's.

Somehow I feel that my world would have been better off if I had never heard of twerking. It scares me to think how much more debased our culture will become in the future. If this is what it takes to get grab attention these days, I shudder to think what my children will be subjected to when they become teenagers themselves. If teens consider sexting to be just another form of communcation, are we surprised by what we saw on TV over the weekend? How soon will it be before MTV moves the VMA's into the late night hours so that can show full on coitus on TV to attract attention?
Posted by ZMD at 11:36 PM

Email ThisBlogThis!Share to TwitterShare to FacebookShare to Pinterest
Labels: TV