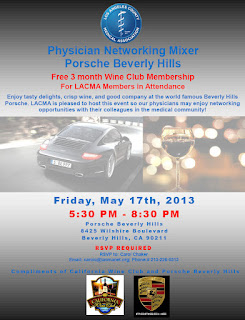 I recently received this flyer from the L.A. County Medical Association. It is an invitation for an upcoming networking mixer sponsored by LACMA to be held at the Beverly Hills Porsche dealer. My readers know that I am a huge fan of Porsche cars. However I felt that this event is a bit inappropriate and broadcasts the wrong statement about the real purpose of LACMA and its members.

To me, it seemed to imply that the regular educational conferences held by LACMA was not interesting enough for more members to attend. Isn't that where doctors should be doing their networking? Is this an indictment on the quality of the speakers they invite to their usual meetings? What does Porsche think they will get out of this? Don't tell me that the dealer will rent out space to a bunch of doctors out of their appreciation for medical education. They are hoping to snag a few sales from some of the assembled MD's. Is this any different from drug companies sponsoring "educational dinners" at a fancy restaurant?

Holding a gathering at a Porsche dealer also sends a bad message. When we are fighting tooth and nail to keep our reimbursements stable, much less keeping pace with medical inflation, what kind of image does that send to Congress, insurance companies, and the public about physician incomes? LACMA should know that image, especially with Hollywood in its backyard, is everything. While doctors complain about how Obamacare will devastate physician salaries, they are holding a car and wine party in Beverly Hills.

Now I'm not saying that LACMA should have a mixer at the local Kia dealer. But perhaps it would have been more suitable to hold a meeting in a less conspicuous and blatantly consumerist location. And doctors shouldn't be lured into attending just so they can be surrounded by cars that cost as much as houses in much of the country. LACMA should continue their business of physician advocacy and educational fare without creating a potential publicity boondoggle.
Posted by ZMD at 9:46 PM