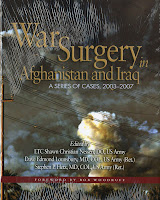 The horrible, cowardly, despicable attacks at the Boston Marathon proved that we cannot keep terrorism outside our borders forever. While other countries experience random bombings like this on an almost weekly basis, we have been lucky to have lived carefree for the last twelve years.

One of the factors that undoubtedly saved many lives was the proximity of well trained medical personnel near the finish line. Though they were supposedly there to treat dehydrated and exhausted runners, their tasks turned much grimmer on April 15. As dozens of casualties started streaming into the medical tent, the staff immediately switched into triage mode, directing patients to the appropriate treatment.

What struck me about these courageous doctors and nurses was how many of them had served in the military. Many of them had done tours of duty in Iraq and Afghanistan. Thus they were familiar with the types of blast injuries that had injured so many. They knew instinctively what worked to save lives overseas and could apply those same techniques here.

During the heights of the Iraq war, I had purchased a book titled "War Surgery in Afghanistan and Iraq." You can call me curious or you can call me a voyeur. As a medical professional I wanted to know the state of the art in trauma care in the 21st century. And this book doesn't disappoint.

It is authored by three surgeons who were stationed in the Middle East. They go through fifty case studies of war injuries that were inflicted on our soldiers and the general population. The pictures printed inside would never pass through the sensibilities of the censors of any lay periodical. The damage to the human body can be truly gruesome. There are large, extremely graphic and bloody pictures of exposed bones and organs throughout. In the first chapter alone, there are sections that seem quite appropriate for the types of treatments the Boston victims will need: "To Shunt, Repair, or Amputate?" and "Devastating Burn, Blast, and Penetrating Injury."

Later there are entire chapters on craniofacial trauma, soft tissue trauma, burns, and of course orthopedic trauma. There is even a section for pediatric trauma. As we all know now, a bomb makes no distinction between an adult and a child. One of the more interesting chapters is on the removal of unexploded ordnances (UXO). In other words, missiles that penetrate the body but didn't explode. I love the authors' recommendation for how to treat a patient with an UXO, "the UXO (should) be removed in the most efficient and expedient manner possible, with minimal physical disturbance to the ordnance." It is so clinical and sterile, typical of a medical professional.

So if you are the least bit curious about how modern warfare has viciously and indiscriminately targeted its victims, go find a copy of this book. You will see how real life battles are not as clean as that game of Call of Duty that you've been playing on your TV in the comfort of your living room. You never know if you will ever get that dreaded call to come into the hospital to treat mass casualties. I'm sure the doctors and nurses in Boston were not expecting it either on that bright beautiful April day.
Posted by ZMD at 11:14 PM

Email ThisBlogThis!Share to TwitterShare to FacebookShare to Pinterest
Labels: Terrorism