Astroturf On A $2.8 million House. Insane L.A. Real Estate Market Is Back 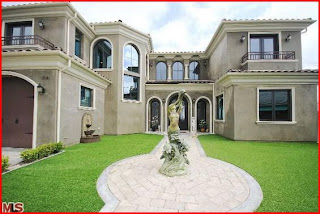 Just a couple of years ago people were predicting doom and gloom in real estate, particularly in large bubble markets like Los Angeles. Comparisons were being made to the real estate depression that has plagued Japan for over twenty years. Many cried out to the government for relief, which promptly acquiesced and introduced near zero percent interest rates they claim they will maintain as long as necessary.

And you know what, it worked. The housing market has come roaring back. Here in L.A., real estate dropped about 40% from its peak in 2008. But now people who waited for an even bigger decline may be too late. In fact, professional house flippers are already starting to return. 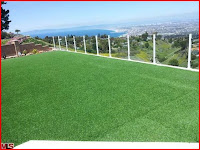 A recent home listing near my neighborhood took me aback for its audacity and bad taste. According to its listing page, this $2.79 million 4,000 square foot monstrosity is a, "Newly custom built home situated at the top of the hill." Yes it certainly looks new, and it does have a killer view out the back yard, but this house is McMansion personified . Though you can't tell from its listing, it is located in the middle of a neighborhood filled with 1950's era ranch style homes that are half its size and price. If your neighbor wanted to borrow a cup of sugar, you could almost reach from your kitchen window directly into their kitchen window.

What made me do a double take was the tackiness of the Astroturf around the house. The owners tried to make this a virtue by describing it as "low maintenance". I think they would have been more successful in selling this fake grass if they had claimed it to be environmentally friendly or even drought resistant. Either way, it is quite jarring to see a multimillion dollar house with a plastic lawn for a yard.

Inside it is all granite tiles and marble columns. There seem to be arches and oversized crown moldings everywhere. The overwrought decorations are meant to justify its extreme price. But the owners better hope they get lucky and find a buy who has the same gaudy tastes in interior design. Anybody who has almost $3 million to spend on a house can buy virtually any house they want. They will not want to spend that much money only to have invest even more dough to rip out all the interior touches that they find objectionable.

So if you were hoping to buy a house in L.A. and was waiting for the market to hit bottom, you may already be too late. Home prices are again reaching levels where even doctors can barely afford to buy one in a decent neighborhood. Though I went through my own personal hell in buying our house a couple of years ago, it looks like I was prescient and got our dream house just in time.
Posted by ZMD at 11:14 PM