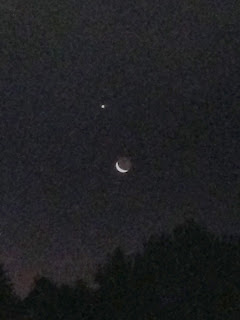 When I left for work before 6:00 AM this morning, I saw this gorgeous image that literally had me stop my car in the middle of the road. Don't worry. It was our neighborhood street with no cars traveling at that ungodly hour.

It is the image of a very thin crescent moon hanging over the eastern horizon. Right above it is Venus, rivaling the moon in its brightness. Below the moon, closer to the horizon and just off the side of the picture, stood Mercury. You can see a little bit of the horizon on the bottom of the picture to give you a perspective. I quickly whipped out my cell phone and snapped a picture but it really doesn't do the scene justice. To the naked eye the moon appeared much bigger being so low on the horizon. The earth's reflected light on the dark side of the moon was intensely bright to the point that I could almost make out the different craters and seas on its surface.

Little can be said for leaving for work so early every day. But sometimes, you get to see amazing images that all but disappear by the time most people wake up for their first cup of coffee.
Posted by ZMD at 9:47 PM