Anesthesiologists don't always get the special attention we feel we deserve. Unlike the surgeons who get the most advanced laparoscopic equipment or the internist who has access to the latest antibiotics or antihypertensives, anesthesiologists are usually relegated to equipment so old it would make a used car salesman blush. I have seen anesthesia ventilators that are still in use even though they were purchased when Elton John was still considered heterosexual.

But perhaps there is a reason for that. You see, we anesthesiologists don't really have a personal stake in the equipment that we use. The anesthesia machines are paid for by the hospital. So are our offices. Unlike other doctors who have to pay rent and take care of their own office equipment, some of us are not as caring that comes from personally paying for things out of our own pockets. I can't tell you how often the anesthesia machines are banged up and scratched. Or the laryngoscope handles get accidentally tossed out in the trash. But here are just two recent examples in our hospital of anesthesiologists who don't give a s*** because, well, they didn't pay for it. 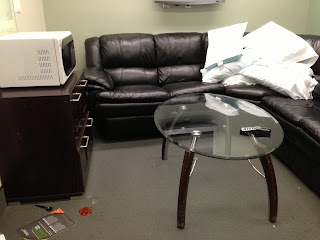 Here is a picture of our anesthesia lounge recently. It is not a pretty sight. Somebody decided to take a nap on the sofa and brought some hospital pillows and blankets with them to make it more comfortable. Unfortunately he, most likely a he, did not bother to take them away when he was finished and just piled it up in a big heap. I guess his mother never taught him to make his bed and clean his room when he was growing up. And what's this stuff on the floor? Why it's cherry flavored hospital jello that somebody, don't know if it's the same person, brought to the lounge to eat and decided he didn't want it. Instead of finding a trash can to throw his food away, it got dumped on the carpet. Classy.

Another disgusting example is this picture of our damaged video laryngoscopy equipment. These things cost thousands of dollars. However they are worth every penny as a difficult intubation can usually be completed with one of these technological wonders. However, some people in our group didn't feel the need to maintain the equipment so that other people might be able to use it. As you can see, our group is lucky enough to have several of these in use, and two of them have been damaged. The screens have been cracked and will require several thousand dollars to repair. You wouldn't see an anesthesiologists treat their personal iPads with such cavalier attitudes. For comparison, here is what a new one looks like. 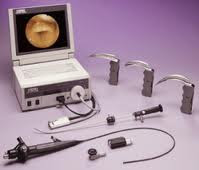 Maybe there is some justification for making anesthesiologists use old outdated equipment. Many have not demonstrated the maturity or the responsibility to handle new things. So now the rest of us will have to make do because of the childish behaviors of a few.
Posted by ZMD at 3:12 PM