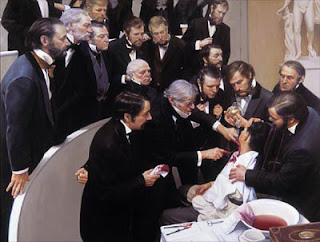 If you're a fan of anesthesia history like me, you need to get yourself the August 2012 issue of Anesthesiology. There is a fascinating account of William Morton, the dentist who first demonstrated the efficacy of ether anesthesia which later became known as Ether Day, and his first documented anesthetized patient, a man by the name of Ebenezer Frost.

First of all, the authors debunk the idea that Dr. Morton was some sort of gifted professional with a fascination for scientific discoveries. They wrote of his troubles with the law as an embezzler and malcontent. He traveled all over the country as he swindled multiple business partners. He eventually settled in Massachusetts and married his wife mainly for her family's wealth. Through circumstances of association Morton came upon the identification of ether as a potent anesthetic. Now he just needed a subject to prove its effectiveness.

Ebenezer Frost was a baker who later became a professor of music. He showed up late on Sept 30, 1846 at Morton's front door complaining of a severe toothache. Morton quickly realized this was the moment he had been waiting for. He brought the patient inside and got his consent for the tooth extraction. Morton then poured ether into a handkerchief which Frost inhaled. Frost was quickly unconscious and Morton pulled out the diseased tooth. When Frost awoke, after Morton poured a glass of water on his face, he didn't even realize that the procedure was already finished. Sound familiar? Morton then had Frost sign an affidavit that he had his tooth pulled while under anesthesia.

Morton wanted to popularize the application of ether anesthesia in the hopes of receiving royalties. This eventually led to the public demonstration at Massachusetts General Hospital on October 16, 1846 which has become immortalized as Ether Day. While the patient on Ether Day was Gilbert Abbott, the first documented anesthetized patient was Ebenezer Frost. Great story.
Posted by ZMD at 1:11 PM