The Agony Of Triage 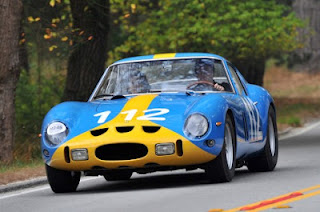 American businessman and multimillionaire Christopher Cox suffered a horrendous blow when he was involved in a car accident in his Ferrari 250 GTO the other day. He and his wife were in France taking part in a caravan of Ferraris celebrating the fiftieth anniversary of the GTO when the incident happened. Mr. Cox's car was estimated to be worth over $30 million. Besides the devastating blow to the rolling money on wheels, Mrs. Cox was reported to have suffered a broken leg. I can just imagine what went through Mr. Cox's mind when the accident occurred.

What the f***! Somebody just hit my $30 million car! S***! Who are the morons that did this?! Honey, will you stop screaming? The car will be okay. We just need to fly my private mechanic here and spend a few more millions to restore this car again. It's been done before. What do you mean your leg is hurting? Oh. I don't think your leg is supposed to bend like that. God where is my cellphone. I need to call the restoration guys right away. You want me to call the ambulance? My car just suffered millions of dollars in damages and you're worried about your leg? That leg will heal for free with the universal health care they have here in France. I have to spend mucho dinero to get this car fixed up.Stop grabbing me. I need to go out to see how much damage was done. Geez I'm glad I left the mistress back in Monaco. Your leg will be fine. The old sawbones will put a couple of pins in there and you'll be as good as new. Where am I supposed to get pristine body panels for this fifty year old masterpiece? How can I ever show my face again at the Pebble Beach Concours? Everybody will know this car is damaged goods. Alright, alright. I'll call for the ambulance. (Whispering into phone) Siri, locate the closest Ferrari body shop to Saint-Etienne-des-Guirets, France. Make sure they accept American Express Black Card. Next make a call to Hotel Metropole. I'm going to need Bridget for the next few weeks.
Posted by ZMD at 11:49 AM