Wouldn't You Rather Have Propofol? 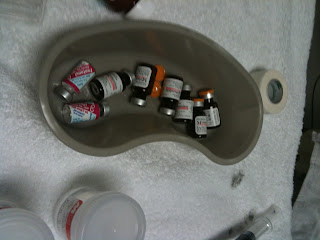 I walked into the GI procedure room one morning while a colonoscopy was underway using conscious sedation. The GI doctor was ordering vial after vial of sedatives while the nurse was frantically trying to get the drugs from the lockbox, chart the patient's vital signs, and attempt to hold down the patient all at the same time. I would have stepped in to help except, well, I was not requested for the patient's sedation and thus did not give the patient an informed consent for anesthesia.

I quickly peeked at the amount of drugs that the team was having to give in order to somewhat relax the patient. So far, as you can see in the picture, the gastroenterologist had given the patient eight milligrams of midazolam and two hundred micrograms of fentanyl. This seems like a lot of drugs for what should be a simple procedure where the patient is supposed to be given just enough for relaxation.

Needless to say, when patients are informed that are going to be under conscious sedation, they are given the sugar coated story about how they'll only feel a slight pressure as the colonoscope is passed through the colon and they should be able to tolerate it with deep breathing and minimal amounts of sedatives. While that may be true for a few diehard people, the majority of patients find it very uncomfortable and will request more medications until they are knocked out, thereby converting a conscious sedation into a MAC sedation.

In order to give that much sedation, it's not unheard of to give double digit milligrams of midazolam and hundreds of micrograms of narcotics, especially for younger or larger adults. Unfortunately for the patients and the doctor's office, a colonoscopy concludes very rapidly, within minutes after the scope reaches the cecum. Now you are left with an unconscious patient with drugs that will persist in the bloodstream for hours. All those narcotics, along with the distended bowel caused by the endoscope, potentiates postoperative nausea and vomiting. You are left with a semiconscious patient in the recovery room that you can't discharge because of their sedation and postop nausea sitting around waiting for the drugs to wear off. This slows down the workflow of the operating schedule and potentially leads to expensive staff overtime. In my opinion, that doesn't sound very cost effective.

Wouldn't you rather just have an anesthesiologist give a single vial of propofol, which is more than enough for most colonoscopies, and bypass all these potential complications? Plus it has been shown that more polyps are picked up by the gastroenterologist when an anesthesiologist is present to give the sedation. Yeah, it sounds like a no brainer to me too.
Posted by ZMD at 11:21 PM