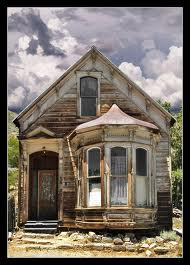 Why is medicine so hard? Many people don't exactly understand what doctors do other than some vague concept of "healer". Consequently they can't sympathize with the plight of medical students and residents when it comes to the length of training involved and the years of sleepless nights that are part and parcel of medical education. I was thinking about how we can teach people the complexities of the human body when a thought occurred to me. The human anatomy is really just an old and disorderly house.

While most people may not grasp the relationship between an ejection fraction and a Starling Curve, the majority do know how a home functions since most of us have lived in a home of one type or another at some point in our lives. This is as good an analogy as any for getting people to understand the intricacies of our physiology.

Let's take one of the most basic of features of a house, the plumbing. Imagine a chaotic house where there are no rules regulating the sizes of the pipes inside. Every house will have different diameter pipes running willy nilly. The pipes, besides being of different caliber, will have different stiffness. Some may be as sclerotic as rock while others as soft as a rigotoni. Now think about the water that runs through this mishmash of plumbing. The water that flows through these crazy conduits will have different pressures and even different viscosities. Imagine a plumber called to service such a house. Do you think the plumber can perform a repair job in this house and get nearly 100% success rate? He would be the most wondrous plumber of all time.

Or how about the ventilation elements of this imaginary house. Would an HVAC repairman found in the Yellow Pages be able to repair ventilation pipes that must be constantly suctioned to get rid of chronic mucus production? Or filtration system so clogged with debris that nothing short of replacing the entire ventilation system will do. Yet doctors routinely treat people with severe pulmonary diseases similar to this.

Let's not forget the nervous system. How would an electrician feel about finding a fuse box to a house with no markings indicating which room each fuse controls? And suppose people have been working on this problem in this house for decades and the answer is still not clear. Can an electrician repair electrical problems in houses where each house has nonstandard caliber of wires and different voltages?

These are some of the difficulties that physicians face every single day when treating patients. Because no two patients are exactly alike,  it is astonishing that doctors are able to properly care for anybody at all, much less with the success rate that is now taken for granted by patients. Yet unlike plumbers and electricians we are expected to be reachable nearly 24 hours a day, with no extra compensation for getting called at 4:00 AM. Is it any wonder that doctors resent all the armchair quarterbacking from the legal vultures and the decreasing compensation thanks to our politicians? We doctors may not have the screen recognition or the star power of a Bob Vila, but I bet most patients are thankful we are more than mere plumbers and other tradesmen.
Posted by ZMD at 7:00 AM