Medicine Is A Great Career 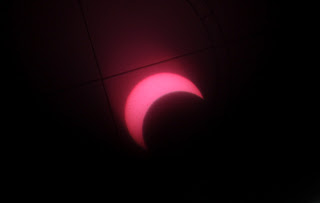 It's over. After much anticipation and hoopla, the great annular eclipse of 2012 has come and gone. We didn't get a complete ring of fire here in Southern California. Instead we got about an 85% blockage of the sun's surface. Still it was pretty neat.

The event reminded me how much I loved astronomy as a boy. I'll always remember the first time I peered into my friend's telescope in his back yard and spied the rings of Saturn. While I had seen multiple pictures of the rings in science books, there is nothing like the revelation of seeing them the first time in real life. I was hooked.

Luckily I grew up in a rural Midwestern town where the night skies were inky black and the neighborhoods safe enough for kids to be out at night without adult supervision. At first I didn't have enough money to buy a telescope of my own so I would have to go to my friend's house or use my dad's war surplus binoculars. Though somewhat limiting, it still allowed me to watch the Jovian moons around Jupiter or gaze at celestial objects like the Orion Nebula or the Pleiades star cluster.

By the time I had saved enough money to buy my own telescope, I was well into high school and thinking about what I wanted to do when I go to college. Astronomy was so much fun, but then being a total science geek, I thought medicine was fascinating too. I was torn about which direction I should take. I'll never forget my mother's sage words of advice when she saw I was facing this dilemma. She counseled, "You can always be a doctor and have a hobby in astronomy, but you can't be an astronomer and dabble in medicine." She was so right.

In retrospect, the choice could not have been clearer. Astronomy is fascinating to read about. But the life of an astronomer is not for me. It's great to look at all the pretty pictures in NASA and JPL press releases, but these scientists might work on one single topic, like the chemical composition of Titan's atmosphere, for years at a time. I'm not sure I have the patience and the passion to stick around for that.

Being a doctor, especially in the surgical fields, offers job satisfaction and near instant gratification when it comes to seeing results. It allows me to learn from my experiences then move on to the next challenge. It also affords me the resources to try other activities, as so many physicians do. From traveling, to photography, to wine making, to car racing, all these are diversions that doctors I know have taken up. By contrast, like my mother said, you can't be a professional car driver and practice medicine during your off time. Medicine is truly a wonderful career.