What Would Horace Wells Say? 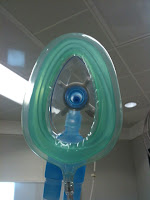 Saw this tidbit on the news. In Poland, a dentist by the name of Anna Mackowiak just broke up with her boyfriend Marek Olszewski. Despite the frayed relationship, Mr. Olszewski had a toothache that needed some attention. So he chose the only dentist he knew, his ex girlfriend.

She thought she could do her job in a professional manner when the procedure started. However once he was on the dentist chair, her emotions got the better of her. She gave him an extra large dose of anesthetic and proceeded to pull out all his teeth. Every single one. When she was done, she wrapped his jaws tightly so he couldn't open his mouth. Mr. Olszewski thought something was not right when he woke up but he didn't realize exactly what happened until he got home and saw that all his teeth were gone. He new girlfriend was so horrified by the sight that she dumped him when she caught sight of his toothless grin.

Oh the soap opera that could be written from this episode. Was he right in dumping Dr. Mackowiak in the first place because she seems obviously unstable emotionally? Was Mr. Olszewski so dim to go to his ex for an invasive procedure requiring sharp instruments? Does he have bad luck in choosing women?

Horace Wells must be rolling in his grave. Anesthesia. Use it for good people. Use it only for good.
Posted by ZMD at 10:14 AM