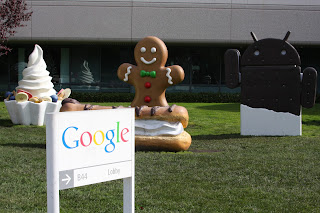 What does an old blogger do when he vacations in San Francisco? Visit the mothership of blogging sites, of course. As part of our trip, we did the geekiest thing possible and drove through Silicon Valley to take a tour of the companies that are remaking our future. One of the locations was the headquarters of Google, the owner of Blogger from which this site is written.

The Google HQ may become the next great tourist attraction, for tech nerds at least. On the front lawn of their visitors center are all the different versions of their Android cell phone software personified. There's a giant statue of Gingerbread, an enormous Android robot made of Ice Cream Sandwich, and all the various other iterations of Android. Most of you Blackberry and iPhone fans probably wouldn't care. But for a tech geek like me, even though I still have my old evil iPhone 3GS, this was like going to Hershey, PA and taking pictures with all the giant Hershey's Kisses. The best part is that these Android statues are out in the open for anybody to visit. They're not locked behind some corporate gates where you need an employee badge to enter. We saw several other cell phone nerds like myself who were there taking pictures.

So next time you are in Silicon Valley, head on down to Google's headquarters and take a picture with a giant plastic food item. It's more fun than eating another bowl of bad clam chowder in a sourdough bread bowl.