How The Occupy Movement Misrepresents The 99% 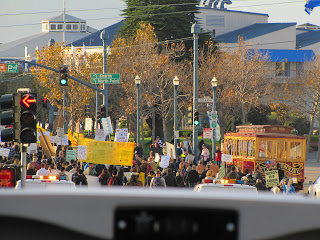 We were on vacation in San Francisco last weekend. What a gorgeous city. It is a real treat to take some time off from work and just enjoy the beauty of this historic city by the bay. We had some relatives with us who had never been to S.F. so we decided to take a tour bus. We have driven throughout S.F. in the past but a tour bus is a great way to get around and see all the sights without all the driving and parking hassles. You can get on and off the bus at any of multiple stops to take pictures. Highly recommended, especially the open topped double decker buses.

Well we were just cruising along the Embarcadero when traffic came to a grinding halt. We were wondering what was going on. Cars were trying desperately to turn off the main road and get into some side street detours. The bus driver was getting frantic as he had a schedule had had to keep. As we slowly rounded a corner on the road, we saw a bunch of police cars with their lights blazing. Then we understand the source of our delay. There was a street march being held by the Occupy San Francisco movement. They were holding up signs like "Taxes, not cuts" and "Occupy SF. Love is still the answer." 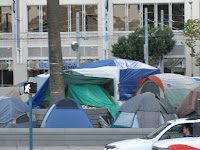 When our tour guide saw what was going on, she went on a diatribe about those protesters. She had absolutely no sympathy for them, even though they supposedly are marching to represent her interests. She said she has been working for over thirty years and these people need to go get a job. Jobs are not just going to be handed to people on a silver platter. The marchers were harming her tour company and countless other small businesses when customers have a hard time reaching them. She continued on about the disgrace of all those tents pitched on public parks. It made the beautiful city look like a shantytown. Because of the protesters, the bus was not able to make one of its regular stops to pick up more passengers.

We later found out that these protesters hid criminal elements. Two police officers were injured when individuals ran out from the crowd and slashed them with sharp objects before running away like cowards back into the protective element of the masses. No matter what their rhetoric is, these people most definitely do not speak for the 99%. They are a bunch of disaffected hooligans who have nothing better to do other than camp out illegally on public property, conduct criminal mischief, and pretend to be angry at society. As our tour guide suggested, "Go get a job."
Posted by ZMD at 8:00 AM