Obamacare Preview--Scarier Than A Halloween Zombie 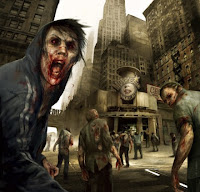 Want a preview of the state of medicine once Obamacare kicks in in 2014? Take a look at California. The Department of Health and Human Services has just given permission for the state of California to cut Medi-Cal's reimbursement to health providers by another 10%. The state is running a perpetual budget deficit and one of the fattest, juiciest, and lowest hanging fruit is physician compensation. This cut is projected to save $623 million from Medi-Cal's $14 billion budget.

It is so easy for politicians to cut doctors' salaries. They know that by law we have to treat patients regardless of their ability to pay. Consequently any study to determine if patient access to physicians is compromised by lower reimbursments show no such impediments. By comparison, the government is having difficulty deciding how, or if, patients should also shoulder some of the rising costs. Undecided is a proposal that will have patients pay a $5 copay when they see a doctor, $50 for an emergency room visit, and $100 a day for inpatient services. Medi-cal patients would also be limited to seven doctor visits a year. That just wouldn't be right for patients to pay something out of their own pockets to see a doctor even as they gladly fork over cash to buy their cell phones, go to fast food restaurants, and see the latest installment of Transformers at the movie theater.

The California Medical Association has calculated that a Medi-Cal patient will only reimburse a doctor $11 for a visit. Think about that for a minute. If the patient has a fifteen minute visit, which may not be realistic because these patients usually have multiple medical issues, that would work out to $44 per hour for the doctor. Out of that $44 the physician has to pay his office staff, office expenses, insurance, taxes, and finally himself. Clearly a doctor who sees Medi-Cal patients is working for sub-minimum wage despite all the risks of hungry malpractice lawyers and thousands of dollars in student loan debt.

Now multiply California physicians' predicament with the projected effects when Obamacare is implemented. Suddenly there will be 30 to 50 million new patients waiting to see doctors who will get paid at Medicaid rates. What happens when the budget is busted and Obamacare potentially bankrupts the government? Here comes the knife at physician reimbursements. There is no scarier vision this Halloween than the future of American medicine.
Posted by ZMD at 12:09 PM