Necessity, The Mother Of Invention 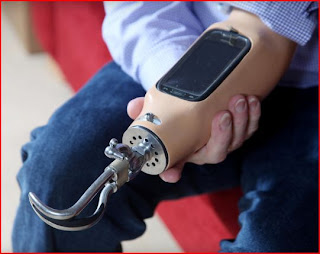 In the category of "why didn't I think of that?" comes this brilliant idea from across the pond. Trevor Prideaux of Sommerset, England was born without a left forearm. He was having no problem being a productive citizen despite this disability. However, he found that operating a smartphone with only one hand was challenging. It's difficult to text with one hand while trying to balance the device on the prosthetic.

Mr. Prideaux thought of a plan to place his phone directly into the limb for stability. He contacted Nokia, the maker of his cell phone, and his prosthetic maker. After six weeks, they fashioned an artificial arm with a built in phone cradle. Freaking amazing. Now he can answer the phone by putting his arm up to his ear, or use the speakerphone. Texting and other functions are also much easier with the phone in this stable position. It's too bad the arm doesn't charge the phone at the same time but I'm sure somebody can configure that setup in version 2.0.
Posted by ZMD at 3:27 PM