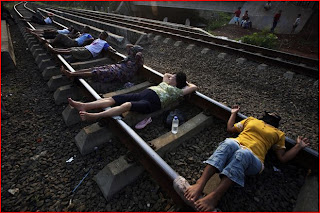 Transcutaneous electrical nerve stimulation (TENS) is a noninvasive form of therapy for chronic pain patients. Performed by pain doctors, electrodes are attached to the areas of the body that are causing pain in the patient. Small electrical currents are then sent from the TENS device into the patient to help relieve chronic pain. It is usually most effective as part of a multi-modality therapy for these patients.

Well in Indonesia, the people have discovered their own method for administering TENS procedure. According to local lore, a paralyzed man was tired of living his decrepit life. He decided to commit suicide by laying on the railroad tracks. He felt a small electrical current go through his body after a train had passed and supposedly he completely recovered his motor functions. How much if any of this story is true is impossible to say, but now there is a small crowd of people who converge on the railroad tracks to feel the electrical currents.

Now people are laying down on the tracks in the hopes of also receiving a miracle cure for free. They believe the train induced TENS will cure everything from diabetes to insomnia. These people are mostly poor, who can't afford decent medical care. They also don't trust the care they receive at the government run medical clinics. Therefore they cluster around the railroad tracks. The trains, which run on overhead electrical wires, supposedly give off an electrical jolt in the tracks before and after its arrival. This dangerous practice has been banned by the Indonesian government, but it is difficult to police all the tracks that run through the countryside.

If these people feel they are getting better from this, then so much the better. At least the Indonesian government isn't paying anything for its peoples' healthcare treatments.
Posted by ZMD at 8:00 AM

Email ThisBlogThis!Share to TwitterShare to FacebookShare to Pinterest
Labels: Pain