A Vast Majority Of Doctors Will Get Sued

The New England Journal Of Medicine published a revealing study about malpractice claims against physicians. The data are from a professional liability insurance carrier and covers over 40,000 doctors over a fifteen year span. The results show that in certain high risk fields, a doctor will almost certainly face a malpractice claim at least once in a career. An average of 19.1% of neurosurgeons faced a malpractice claim in each year of the study. Therefore over a fifteen year span, some were sued multiple times. Other high risk fields include cardiothoracic surgery, where 18.9% were sued each year, and general surgeons, whose ranks showed greater than 15% were sued annually. The lower risk fields, as one would imagine, were in the primary care fields. Only 2.6% of psychiatrists, 3.1% of pediatricians, and 5.2% of family practitioners encountered lawsuits on an annual basis. The high risk physicians were calculated to have a 99% chance of getting a malpractice claim in a career while the low risk fields still has a 75% chance of getting sued. 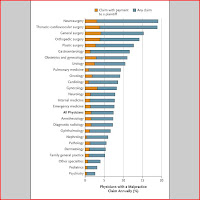 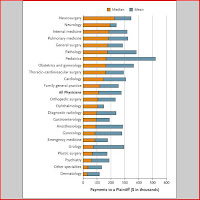 Roughly 8% of anesthesiologists will face a malpractice claim each year, right about average for all physicians. The median payout from a malpractice suit was under $100,000 and the average payment for a suit was under $300,000. Both those numbers are below average for all physicians. Those are pretty good numbers considering that anesthesiology was once considered one of the most high risk fields in medicine with malpractice insurance premiums to match. Maybe it's thanks to our continuous improvements and advocacy of patient safety that is making the difference.
Posted by ZMD at 11:55 AM