Doctors' Cries Of Poverty Ring Hollow To Many

Doctors have been complaining for some time that they aren't really rich. Between the extraordinary student loan debts physicians face, the declining reimbursements by payers, and the escalating practice overhead, doctors have been crying a river over their declining fates. 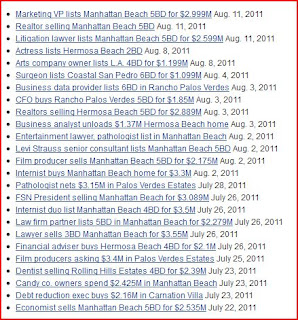 Yet to many observers, these lamentations don't sound sincere. It's easy to look around and witness examples of doctors who are much better off than the average person, or even professional, in America. The accompanying clip is a screen shot from BlockShopper.com of recent real estate transactions in one local Los Angeles region. As you can see, it is not difficult to find primary care doctors buying and selling multimillion dollar homes in Southern California. They're not exactly scraping by down here.

Another anecdote about the extravagant lifestyles of doctors can be found in the cars they lease. Leasetrader.com recently revealed that many professionals were downsizing their leases because of the economy. Doctors were the number one profession to change their leases. And what kinds of cars were they leasing? Mainly Mercedes S Class, BMW 7 series, and Maseratis. What are they slumming down to? Mostly smaller Lexuses and BMWs. After all, doctors have to maintain their images. As Archie Bunker once said, would you trust a doctor who drives a Plymouth?

Physician compensation may be weakening, but that doesn't mean doctors want to lower their standard of living. Despite crushing school debt, many residents' first cars are BMWs and Audis. Doctors live in nice neighborhoods so that they won't be embarrassed when they invite their colleagues over for a barbeque. They send their children to private schools since that's what their partners recommend. In the hallways they discuss the latest Barron's article about current stock market conditions and whose financial adviser is best. Whereas ordinary people may vacation at Disneyland, Las Vegas, or Santa Barbara, doctors bring back slideshows of their trips to Machu Picchu, Komodo Islands, or Petra Jordan.

So yes doctors may not be making as much as they used to. But perhaps the only ones who will notice are the older doctors who were able to milk the insurance system for all the money they could get. Nowadays the younger generation have to make do with more regulations and less compensation. But that doesn't mean they'll be buying their groceries with food stamps anytime soon.
Posted by ZMD at 8:00 AM