Imagine That. Anesthesiologists Are Doctors Too.

I ran across an interesting article on CNBC.com while surfing the web. It's a slide show highlighting jobs that one might not expect would pay $100 an hour. Some of the jobs they list do pay a surprisingly large amount of money (tattoo artist? life coach?). However I was rather shocked, and dismayed, that anesthesiologist made the list. On the very first slide, CNBC does say that becoming a doctor is one of the "easiest" ways to make $100 an hour. But when you click down to the third slide you can sense a feeling of astonishment that an anesthesiologist makes that much money. I've included a screen shot of that slide (click on the picture to enlarge). 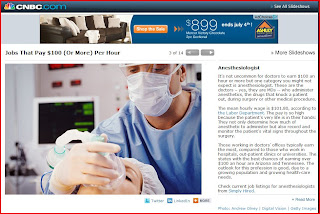 The ignorance, and condescension, can be read in the first paragraph. "It's not uncommon for doctors to earn $100 an hour or more but one category you might not expect is anesthesiologist. These are the doctors--yes, they are MDs (my emphasis)--who administer anesthetics, the drugs that knock a patient out, during surgery or other medical procedures."

So let me get this straight. CNBC believes doctors easily make over $100 an hour. But the person providing a humane surgical experience while the surgeon is hacking away at your body is also making that much money because, surprise!, he or she too is an MD. Looks like the ASA has its work cut out for it trying to promulgate the Lifeline to Modern Medicine campaign.

Frankly, sometimes I think it is preferable for anesthesiologists to fly under the radar when it comes to public perception. We know we are physicians, and have the income to prove it. But if the general populace are ignorant of that fact, then maybe they won't label us as part of the "rich" who deserve their scorn and envy. The only people who we really care to be jealous of us are still slaving away in the operating rooms at 7:00 at night while we have long ago driven home in our Porsches to be with our families and have a decent quality of life. Anonymity sometimes ain't half bad.
Posted by ZMD at 12:54 AM