I Wanna Be A Billionaire...Wait, I Already Am.

Bill Gates, founder of Microsoft Corp., recently gave an interview to the Daily Mail in the U.K. In it, he revealed that his young children regularly tease him with the Travie McCoy/Bruno Mars hit song "Billionaire". He even starts to sing it to the interviewer. Hilarious. I think it's cool that the world's second richest man is humble enough to like the same music as the rest of us plebeians. Of course, while I can only sing wistfully one of my favorite songs from last year, Mr. Gates has actually lived the life sung in the lyrics.

I wanna be a billionaire so f***ing bad.
Buy all of the things I never had.
I wanna be on the cover of Forbes magazine.
Smiling next to Oprah and the Queen. 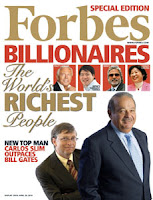 Though he claims he will only give a few measly millions to his children, I hope he doesn't deprive them of the same experiences he has had. In the meantime the rest of us will work our 60+ hours per week for the next thirty years hoping to attain 1/10,000th the wealth this extraordinary entrepreneur has attained. Keep up all your good works Mr. Gates.
Posted by ZMD at 3:08 PM