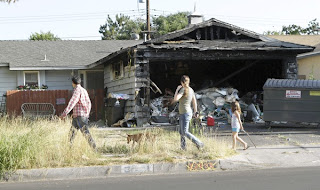 Take a look at this house in the nice West Hills area of Los Angeles. It's a burnt out, condemned structure that has been overrun by drug abusers and vagrants. The original owner of the house died a few years ago and his son took possession of the house. He has not exactly kept it in working condition. The charred garage, the dumpster in the driveway, the unkept weeds in the yard. This place doesn't exactly scream suburban oasis.

The neighbors have been agitating for the city to do something about this eyesore for years. They've petitioned the city for relief. Of course the city councilman claims they have no records of any complaints about the house. The owner of this mess finally sold the house and the last resident moved out. How much do you think a shell of a house like this should cost? Try $290,599! That's the official record of the sales price for this thing. Amazing anybody would pay that much money for it. Who says the housing bubble has almost run its course? At least not in the nicer areas of Los Angeles.
Posted by ZMD at 8:31 AM