It's been a strange, wacky kind of day, and week so far. Here in SoCal we have been experiencing record amounts of rainfall. Don't worry blog readers. We haven't been inundated like the residents along the Mississippi River. Around here 0.25 inches of rain puts us in the record books. Still this is highly unusual for L.A. in mid May.

Then of course there is the bizarre story of the arrest of the savior of the capitalist world. No, not President Obama you silly. I'm talking about the rape charges against IMF chief Dominique Strauss-Kahn. I guess what's a perk for the French elite isn't so acceptable for the Americans. Now the economies of several European countries may collapse because of this guy's dalliances. Wacky.

All of which leads me to this, the 15th annual Wacky Warning Labels contest sponsored by The Center for America. They highlight five of the most frivolous warning labels on consumer products that are present only because of the American judicial system. How do we know this is a uniquely American experience? The warning label on a package of pens sternly advising one not to put a pen cap into one's mouth because it may lead to suffocation is written only in English, not in French, Spanish, or German as the rest of the package is written in. I guess Americans have an infantile need for more handholding and supervision while our European friends are busy with their more "adult" pursuits. Other warning label finalists include one that advises users to take the top off a jacuzzi tub so one doesn't drown when soaking inside and a bicycle brochure that warns the pictures of the happy people riding the bikes are professional riders, even though one of them is a small child riding with training wheels. 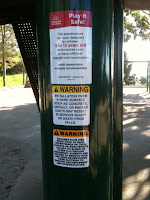 I took this picture of the warning labels on the playground of our local park. Click on the picture to make the words more legible. There are more stickers on the play set than there are beams on the monkeybars. We are told what ages children should be allowed to play on the equipment. How we should never allow kids to play without adult supervision. And how children have been strangulated when their clothes have gotten caught on the bars. Gee doesn't that sound like a load of fun for a bunch of kids to climb around in. Whatever happened to telling the kids to go to the park and play for a couple of hours? Now there is at least one adult at the playground for each child present. No child is allowed to play without the wary eyes of his parents fixated on his every movement. And heaven forbid if you try to help out somebody else's child at the park--people might mistake you for some sort of child molester and call the police on you.

Thanks to the trial lawyers in America nobody is allowed to get hurt or to have an unexpected injury. If something did happen, then of course it's never our fault. Somebody else must be to blame. Hopefully that somebody is a big company with very deep pockets and good insurance coverage. Then we can nurse our fragile bones and egos back to health with a large settlement check.
Posted by ZMD at 3:01 PM