Public Transit In L.A. Not For Most Private Citizens 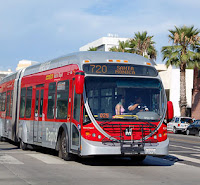 Don't know about the rest of you, but gas prices here in California have been skyrocketing. The local stations are now selling regular gasoline for over $4.00 per gallon and premium gasoline for over $4.25. Darn you Mideast unrest and Chinese economic boom. So you would think that people would be stampeding toward their closest bus or train station to ride the public transit, right? Well, not so fast.

I calculated the time it would take for me to use public transportation to travel from my house to my hospital. A nifty little free website called Google Transit calculates your bus route from your home to your destination based on actual bus routes in your city it possesses in its records. I live about 25 miles from my work. Some of you may blanch at that commute. But here in L.A. it's par for the course. In fact I know some people who drive over 50 miles each way to get to the hospital every day. Why do we do this? First of all out in the suburbs we get a lot more for the money compared to central L.A.: more housing, more land, more parks. It is just a better quality of life. The second important reason is the public school system is much better. The only doctors I know who live close to my hospital are either older doctors who bought their houses decades ago when housing was still reasonable and doctors' salaries were multiples of what they earn today, or they have kids who attend expensive private schools while living in small, congested bungalows. Not exactly the kind of situation that would make your parents proud they raised a doctor.

How long would it take for me to take public transportation to get to work? I entered my home and my hospital addresses in Google Transit. I thought maybe, just maybe, if the public transit was reasonable I might try it just once. I entered my arrival time at the hospital as 6:30 AM, which is reasonable for my 7:00 AM O.R. start time. In less than a second, the program had an answer for me: one hour and 58 minutes! Are you kidding me? First of all, it instructed me to walk to the closest bus station from my home, 28 minutes away. Then I had to ride two separate bus lines, each one with over thirty stops each. Finally the last stop still left me short of the hospital by about two blocks. Yikes. Therefore to get to my work on time, I would have to leave the house by 4:30 AM, walk in total darkness for half an hour, then endure over sixty bus stops along the way before I have to schlep the last half mile to work. Thanks but no thanks.

Los Angeles has never been a subway or busing city like Washington or Manhattan. All the work are located where people can't afford to live and all the housing are where companies don't want to locate. This is why my next car is going to be a hybrid. Now if I can just ask the government to give me a raise by increasing our reimbursement rate...
Posted by ZMD at 8:00 AM