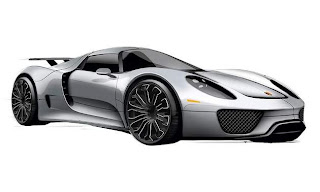 My fantasy of buying the perfect Porsche has been dashed. At the Geneva Auto Show last year, Porsche displayed the 918 Spyder Hybrid. It is a Porsche with 500 HP that also gets 78 miles per gallon. I described it as a "dream". I certainly wasn't living in this reality. I unrealistically hoped the car would be affordable even for a physician. Now the reality has struck me with a giant two by four on both cheeks, and all cheeks.

At this year's Geneva Auto Show, the company has announced the price for this environmentally conscious Porsche--$845,000.  As a bonus, Porsche will allow the buyer to purchase a special limited edition Porsche 911 Turbo S for the exclusive price of $170,000. Who can pass up such a deal? Despite the public's perception that all doctors,especially anesthesiologists, are fat cats, I don't know of too many physicians who have the discretionary income to afford this car. In fact, the only medical people who can buy cars like this are hospital administrators and their ilk. Surely the CEO of New York Presbyterian Hospital, 2007 salary of  $9.8 million, can purchase this car. If he is reading this, let me just say that donating a car shows generosity of heart, even if it is given to little ole me. I'm just saying.
Posted by ZMD at 8:00 AM