Sometimes history has a way of catching up with us, grabbing us by the neck, and not letting go. The revolution currently underway in Egypt has been both terrifying and inspiring to watch. From the comfort of our sofas in the U.S., it's easy to root for the anti-Mubarak crowd as they try to overthrow their despot of over thirty years. We can sit back in our comfortable recliners and cheer them on, but these people are not playing chicken with the government's tanks and militia. They are real flesh and blood human beings on the streets of Cairo fighting for their livelihoods and their very lives.

There have been few incidents in recent world history that have aroused such sympathy around the globe. Some rebellions have been successful in removing the tyrants that oppressed their people for generations. A few examples that come to mind include the 1980 Gdansk revolution in Poland that was the beginning of the end for the Iron Curtain and the 1983 People Power rebellion in the Philippines that removed Ferdinand Marcos from power after 21 years of tyrannical rule. 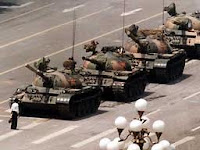 History has unfortunately also supplied examples of rebellions that failed. The most noticeable are the Islamic Revolution in Iran in 1979 that brought with it not a democracy but religious tyranny to its people. And of course the video images from Egypt are eerily similar to the Tienanmen Square uprising in China in 1989 that was ruthlessly crushed by the government just weeks later. Its students leaders were all either imprisoned and "reeducated", killed, or exiled.

Will today's unrest in the Middle East be an inspiration for individual rights around the world or end in another heartbreak as people realize that dictators are not easily, or frequently, brought down. At the moment any thought of blogging about our healthcare system or funny anecdotes of life in anesthesia feels trivial and petty. My eyes are glued to 24 hour cable news right now. Any witty observations about life in a comfortable hospital here in the relative stability of the United States will just have to wait for now.
Posted by ZMD at 11:48 PM

Email ThisBlogThis!Share to TwitterShare to FacebookShare to Pinterest
Labels: Egypt