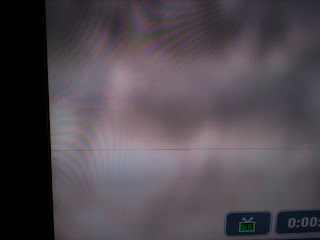 My TV broke yesterday. Well not exactly broke. It developed a picture defect. It was just fine when I was watching American Idol last week. Then over the weekend when I turned the TV on a fine black horizontal line appeared across the middle of the screen. At first I thought maybe it was only on a particular channel. But then I tested it on different channels and a DVD and the line was still there. Yup. The TV is starting to give up the ghost. I can only see the line on a picture with a light background. If the screen is showing a dark picture the line is hardly visible.

At first I was thinking "WTF!" Then I realized there is a huge bright side to this dark line. I can finally get a new TV! I had designed the entertainment center in my man cave to accommodate a much larger screen than what I currently own. But the ole missus has always said there's nothing wrong with our TV. Why spend money on replacing something that works perfectly fine? She has a point. Plus after our remodeling project after buying the house, our cash was running a little low anyway. A spanking new mega TV was not in our budget. But it's a new year. The piggy bank is starting to replenish itself a little bit. And now there is a clear indication for a new giant flatscreen 3D TV.

It's disappointing how quickly this TV developed a defect. It is only four years old. Yes I know that is an eternity in technology. Computers are made to be replaced every three years. Cell phones are designed to last only the standard two year phone contract. Apple releases a new iPhone every year and everybody dutifully ditches their old one for a slightly newer and improved one. But I am old enough to remember when electronics were built to work for years, even decades.

One of my earliest TV's was a portable 13 incher from Zenith. It was "portable" in name only because it weighed about 30 pounds. This TV had the density of plutonium. It had a built in carrying handle on the top which made it portable. The TV had two tuning dials: one for VHF and one for UHF. Remember VHF and UHF? This baby lasted from my junior high years when my parents got it for my bedroom all the way through high school, undergrad, medical school, residency, and attending. The picture, while small, was sharp, colorful, and gorgeous. If you had a good reception from its antennas, the picture was better than any cable channel. Unfortunately I finally got tired of lugging around the little TV from one location to another. I finally donated it to a friend who I'm sure will use it for years to come. I'm getting misty eyed just thinking about it. Here's to the great American manufacturing quality that long ago disappeared with our current account surplus and meaningful physician compensation. In the meantime I'll be watching a lot of dark programming on my defective TV. How many times can I watch "Pitch Black"?
Posted by ZMD at 8:00 AM