When Flying Was Fun 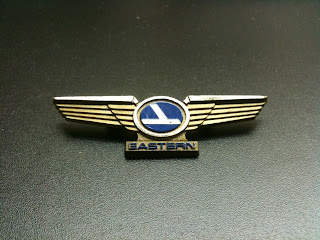 As some of you history buffs may know, Eastern was a major airline in the United States during the 1960's and 70's. Their stronghold was the eastern United States and the Caribbean. It was a highly regarded airline company at the time, right up there with TWA and Pan Am. They all eventually met the same fate after the airline industry deregulation; Eastern went bankrupt in 1989.

I was cleaning out my desk drawer in preparation for moving to our new house when I came across this little bit of nostalgia. I've had this Eastern pin for almost forty years now. It has survived several cross country moves, multiple job transfers, and family celebrations and tragedies. Looking at it and holding it in my hands instantly brought back a flood of memories of a more tranquil time not so long ago.

I must have gotten this lapel pin when I was still in elementary school. It was probably during our family vacation to Disney World in the mid 1970's. Back then it was actually fun to fly in an airplane, at least for a kid. Though all the smoking inside the cabin wasn't such a great deal, the cabin crew tried their best to keep a child entertained. There were the free sodas, snacks, and actual meals served during a flight. The flight attendants passed out pins to the kids. If you asked, she (they were all women then) would also give you a deck of cards with the airline's logo on it. Something that would be inconceivable today (thank you Osama bin Laden) the pilots would sometimes step out of the cockpit and invite a lucky few to go to the front to see how they fly the planes. If we were sitting near the front, we could look up the aisle and peer into that little room with its hundreds of round gauges, levers, and flashing lights. Oh flying was a blast.

Nowadays I avoid flying like a bad emergency C-section. Between the cattle herding, baggage check in fees, and TSA strip searches, flying on planes is more hassle than hilarity. That's one reason we went on a long road trip over Thanksgiving instead of flying. Maybe I'm just getting old, over the hill. But it seems like life in America was better back in the day.
Posted by ZMD at 10:21 PM