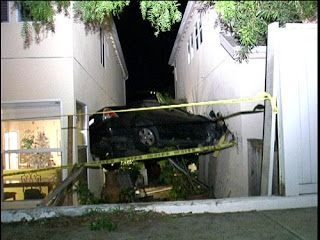 Here's something you don't see very often. A drunk driver in San Pedro, a suburb of Los Angeles, lost control of his car and literally flew off the road. He and his passenger wound up wedged between the sides of two adjacent homes. According to the newspaper article, there were no skid marks on the road leading up to the accident scene. Luckily nobody was killed and the car passenger was well enough that he tried to run away from the car. Bizarre but not surprising in a city where car chases are a secondary form of TV entertainment and driving mayhem has been immortalized into a video game.
Posted by ZMD at 5:10 PM