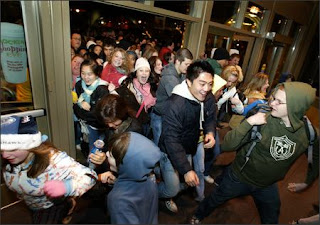 Christmas shopping isn't the only thing people rush to complete in the month of December. Seems like many are also trying to squeeze in their medical care at this time of year. You would think that getting sick would not be a seasonal event, other than getting the flu. But our hospital is always incredibly busy from late November to New Year's Eve. Every operating room is booked for the entire day. Post call personnel are asked to work instead of getting their usual day off. Don't even think about calling in sick unless you are on a vent in the ICU somewhere with multiple pressors running. Everybody complains about the lack of rest and not having enough time to see their families. Then once the clock strikes midnight on New Year's Day, O.R. volume drops precipitously. Suddenly they are requesting, if not scheduling, people to take time off. People finish their O.R. line up by 1:00 PM or sooner. Anesthesiologists are begging for more cases to do. Everybody grumbles about not making enough money to pay their mortgages and children's private school tuitions.

What accounts for this annual health care stampede? I don't have a definitive answer but the consensus around here is that it's all about the money, or to be more precise, free health insurance money. The theory is that by December, most patients have already paid in full their deductibles for the year. At this point, all medical treatments are being paid by the health insurance company from the first dollar. Therefore smart logical people will try to get as much done as possible before the calendar rolls over. Everything semielective and expensive such as surgical procedures are put off until the end of the year. This theory also explains why the number of scheduled surgeries plummets in January. Suddenly people have to start paying their deductibles again. Unless it is an emergency or a necessity, medical treatments are put off as much as possible.

I have no concrete evidence to prove this theory but it makes sense. Rational people will make decisions based on their best self interest. If somebody will pay for your health care for free after a certain set deductible, why not use and abuse it as much as possible? That's why health care is rationed in countries with universal health care, like England. Patients will consume as much medical care as they can get away with if nobody is paying for it. In this country we don't have universal health care; everybody gets to have their goodies for only one month until December 31st. Then a more rational medical consumer reemerges and we anesthesiologists finally get to go on holiday vacation.
Posted by ZMD at 2:00 PM