The election last night swept away many Democrats from public office.  It is generally considered a bloodbath for the Democratic Party and a repudiation of President Obama's agenda. Congress returned to Republican control with a gain of sixty seats. The Senate will be welcoming six new Republicans into its chamber. Seemed like everything was going the Republicans' way last night, except for out here on the leftist coast of California. In a period where voter anger allowed a Republican to win Ted Kennedy's former senate seat in Massachusetts and New York's legislature may lose it's Democratic majority, the mood here is "more liberal politicians, please".

How liberal is the state of California? Jerry Brown, formerly Governor Moonbeam when he was first elected California's governor in 1974, has been reelected over Meg Whitman, former CEO of eBay, by 12 percentage points. While Republicans gained six seats in the Senate, California's Democratic Senator Barbara Boxer won her reelction by 10 points over Carly Fiorina.  Throughout the entire higher political state offices, Democrats prevailed. Every position from Lt. Governor to Attorney General to Insurance Commissioner were won by Democrats.

California's unemployment rate is currently 12.4% with an underemployment rate of over 20%. Yet a proposition that would have removed the state's new jobs-killing cap and trade greenhouse emissions law was defeated by 22%.  Even a dead Democrat is considered a more viable candidate than a live Republican. Democratic State Senator Jenny Oropeza, who died unexpectedly October 20th, beat out a very much alive Republican candidate John Stammreich 58% to 36%.

But what do you expect from a state where illegal immigrant students at University of California pay state resident tuition instead of out of state tuition, or deportation? Where in the worst recession since the Great Depression, Los Angeles county officials got pay raises of 45% over the last three years and over 17,000 county employees enjoy salaries of over $100,000 plus benefits and lifetime pensions that start at the age of 50? Where everybody is for solar energy until the panels obstruct the views from their back yards?

Ah, California. This is the utopia that Democrats still cling to for reassurance that the entire country has not turned on them. The whole country may be turning red on the election map, but Democrats will always have their sliver of blue oasis on the western edge of the country to call their own. 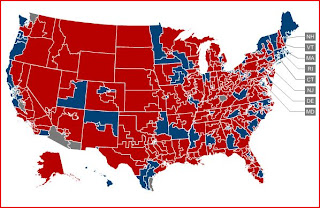 Email ThisBlogThis!Share to TwitterShare to FacebookShare to Pinterest
Labels: election