Anesthesia Is Not Easy 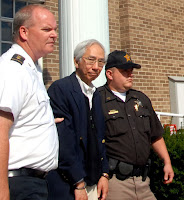 Another doctor has learned the hard way that administering anesthesia is not as easy as it looks.  In the hands of anesthesiologists, anesthesia looks like a piece of cake.  Inject some white medicine into a vein and the patient goes to sleep.  Stop the injection and a few minutes later the patient wakes up.  What could be easier than that?

Dr. Rapin Osathanondh has paid the price for trivializing the risks of anesthetics.  The Massachusetts doctor was performing an abortion on Laura Smith in September, 2007.  Apparently he gave the sedation himself as no staff in his office was trained to monitor anesthetized patients. Ms. Smith was totally unmonitored; no ECG, BP, or pulse ox were present.  For that matter, no supplemental oxygen supply was found either.  The patient suffered cardiopulmonary arrest after the procedure.  The doctor then failed to call 911 promptly and lied to investigators about his attempts to resuscitate the victim. Under a plea deal, Dr. Osathanondh will serve six months in jail but is eligible for parole after three months followed by nine months of home confinement.  He also will pay the family $2 million in penalties.

Does any of this sound familiar?  That's right, I'm looking at you Dr. Conrad Murray.  We anesthesiologists have years of experience giving anesthetics and monitoring for its potential deadly effects.  Specialists make procedures like colonoscopies, cardiac caths, and abortions look effortless. But that doesn't mean doctors who aren't similarly trained should perform them. So why do some physicians insist they can give anesthesia when they have no idea how it is supposed to be done properly? Let's hope this is another tough lesson that nonanesthesiologists can take away from and stop jeopardizing patients' lives in order to expedite their own practices.
Posted by ZMD at 8:00 AM