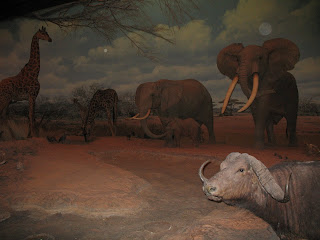 No, not really.  But it would have been appropriate when I went to the Museum of Natural History with my kids.  It was hall after hall of stuffed dead animals that looked like they were state of the art in 1960, not 2010.  Even Disneyland uses animatronics mimicking live creatures to entertain the young'uns.  At the museum there were only rows of ancient dioramas with small placards explaining the scenery. "Oh look son, another window of a stuffed seal sitting on a very fake looking ice floe." The bird hall had a massive glass display filled with hundreds of dead birds.  It was actually rather creepy.  The kids were bored quickly and asked incessantly to play with my evil iPhone.  I wished Ben Stiller was there to turn the experience into a Night at the Museum.

The few areas of the museum that held my children's interests involved live animals or hands on interaction.  They got a kick out of the Insect Zoo.  They had multiple small terrariums filled with all sorts of icky creepy creatures like tarantulas and giant beetles.  Kids love that.  I couldn't pull my son away from all those bugs.  Then in one of the mammalian halls they had several touch screen computers that were swarming with children.  One of the computers had an interactive display comparing different types of animal dung (bears don't digest berries well).  Very amusing, and very educational.

In the age of Google and the internet museums need to keep pace with the expectations of their audience.  Still models of dead animals will not suffice when children can get dynamic videos on their home computer screens. I used to love going to museums.  But I was a child three decades ago.  Today's children need more to pull them away from their Wii's.  Unless museums understand how to modernize their displays, they could soon themselves be relics.
Posted by ZMD at 1:42 AM