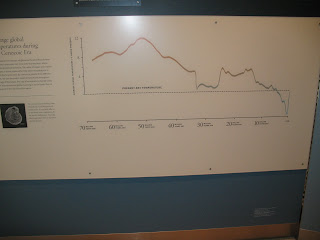 I saw this display during my trip to the Museum of Natural History.  It is shown to point out that the earth has been experiencing severe global warming since the beginning of the Industrial Revolution.  That change in temperature is represented by the infamous "hockey stick" line all the way over on the right side of the graph.  But when I saw this at the museum all I noticed was the average global temperature over the previous seventy million years as drawn on the rest of the chart.  From the chart it is obvious the earth has previously been much warmer. Only in the last few million years have we experienced a more temperate climate.  The recent global warming phenomenon doesn't even take us back to the previous baseline of global temperatures. We are still below average compared to a few million years ago.  It is clear the earth went through an Ice Age in recent history. But now it seems obvious that was not the norm.  The earth is merely rebounding from an abnormally cold climate.  So should we be spending trillions of dollars globally trying to combat mother nature when she is just trying to get back to her previous warm state?
Posted by ZMD at 2:00 PM