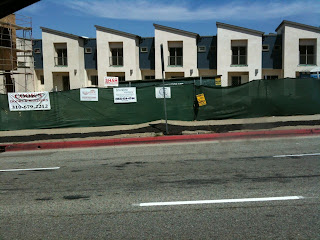 I saw this new housing development while driving the other day.  I noticed it mainly because of its ghastly architecture and colors.  Who would live in places that looked like that?  I looked up the developer's website that was posted on the fence.  They describe this complex as "Modern and stylish with a contemporary color palette and exceptional craftsmanship."  How many people do you think will live on this crowded lot?  The developer says that this is a "fourteen-home community of fashionable luxury homes."  Fourteen?!  I bet you didn't think it was possible to take a picture of fourteen "luxury homes" in a single frame.  In most parts of the country you couldn't; that would usually require a couple of blocks to fit fourteen luxury homes.  I also want to mention that these homes happen to sit on one of the busiest streets in town.  How much would you pay to live here?  $100,000? $250,000?  The website currently doesn't have an offering price, but similar places around town made by the same builder go for the mid $500,000 and up.

If you are a medical school graduate from say UCLA or USC, how likely would you go into primary care if homes in decent neighborhoods start around $500,000?  Can you justify dragging your family through years of debt working down a six figure student loan while paying a rising federal income tax, California income tax of 10%, an LA County sales tax of nearly 10%, taking care of hordes of MediCare, MediCal, and indigent illegal immigrant patients all the while making less than $200,000 a year?  It's no wonder that doctors are avoiding primary care or leaving the state entirely. Other than the greater New York City area, a doctor can get a pretty decent house elsewhere for less than $500,000, even in large cities like Chicago or Dallas.  In California, you either learn to become a specialist or you're just another schmuck who's been drinking up the Koolaid of primary care nobility the medical schools and government have been feeding you.  Yes people appreciate your sacrifices but nobody will pay you a living wage for your services. Oh, that's right.  You didn't go into medicine for the money, did you?
Posted by ZMD at 8:00 AM