What My Health Insurance Premiums Pay For

Anthem Blue Cross, the largest health insurer in California, has announced they are raising premiums 20% starting September.  Everybody knew this was coming after they withdrew their plans for raising premiums 39% during the ObamaCare debates.  That announcement was made during a period when it seemed ObamaCare would fail in the Senate.  The ensuing furor was the final push necessary to pass it.  Was it just coincidence that passage of the bill will require everybody in the country to purchase health insurance?  Like the ones being peddled by Blue Cross?

Wellpoint, the parent company of Anthem Blue Cross, made $877 million in the first quarter of 2010.  The company's CEO made $13.1 million last year.  I have to buy my health insurance in the individual market since like many doctors I am a self employed small business man with no employer to subsidize my health insurance.  These rate hikes affect mainly the individual insurance market since this is the last refuge of the sick.  Healthy people tend to delay buying individual health insurance at these prices.  I spend thousands of dollars every year on my insurance premiums.  Anthem, despite pleading poverty, continues to waste money on chotchkes like this: 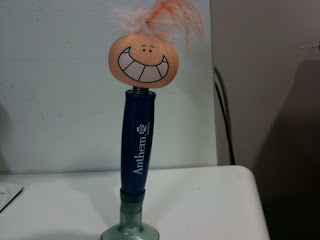 If Anthem Blue Cross will lower their premiums, I'll promise not to take any more free pens from them. Is that a deal?
Posted by ZMD at 8:00 AM