U.S. Soccer On A Roll 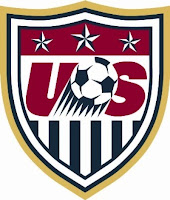 Congratulations to the U.S. soccer team  on their win today against Algeria at The World Cup.  For the first time in 80 years the U.S. won their round and will go into the Sweet 16 against a team that has yet to be determined.  Poor England came in second but will also advance to the next round.

Now I've never been much of a fan of soccer.  Growing up in the Midwest the only football I knew started preseason in August and ended with the Super Bowl the following January.  Soccer wasn't even offered in our school system.  It was just the basic American school sports triumvirate of football, basketball, and wrestling, with a little tennis and track and field thrown in.  My feelings towards soccer can best be illustrated by this clip from The Simpsons below.

Having lived on the West Coast for nearly twenty years, I've come to appreciate the energy and excitement every four years when The World Cup rolls around.  Most people here grew up with soccer, both at school and at home.  They know all the great soccer powers in the world and their legendary players with their legendary footwork.  As for me, I admit I'm still ignorant of the rules, "What, there is no time out?"  You might as well be talking hockey to me.  I couldn't tell you the difference between a striker and a defender.

But I'm learning.  It's much easier when there are lots of soccer experts around to explain how offside in soccer is different from offside in football.  And why handball in soccer is a dirty word.  As the latest fair weather fan of American soccer, I'll be rooting for our team as far as they can go in the world's most watched sporting event.  But come August, the NFL will have my attention and my big screen tv for the next five months.  Go Chiefs!

Email ThisBlogThis!Share to TwitterShare to FacebookShare to Pinterest
Labels: The World Cup