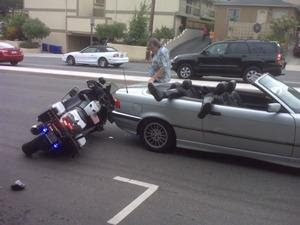 Have you ever wondered about the humanity of your fellow citizens that share the road with you? The above picture was taken by a passerby shortly after an accident in Hermosa Beach, CA when a police officer rear ended the BMW convertible.  You can see the officer's legs sticking out the back seat and the driver inspecting the back of his car.

Not only does the driver seem to care more about the condition of his car than the health of the human being sprawled across his back seat, but the suspect, Brian Hitchcock, wrote some pretty inflammatory statements to the local newspaper.  First of all, Mr. Hitchcock denies being the driver of the car but he seems to know the driver really well.  Says Mr. Hitchcock, "The driver of the car, with 41 years experience, appeared stunned by the sudden intrusion of the officer landing behind him. It is not known whether he was injured by the flying officer."


Mr. Hitchcock goes on to defend the driver in the accident as some sort of hero, "The driver of the car may have been scared out of his wits when officer Parente fired up his siren at point-blank range. Nevertheless, the driver's quick response allowed him to keep the car safely in its own lane, which avoided involving other motorists in the accident."  He also kindly points out that the rear driver in a back end collision is usually the one at fault under California law.  There is no inquiry by Mr. Hitchcock on the well being of the police officer or any signs of sympathy toward his injuries.

Police have noted that during a routine police stop a driver usually slows down and pulls to the right side of the road.  It is evident in the picture that the car was still in the middle of the road lane when the accident happened.  The police department is investigating  if the officer was riding too close to the vehicle when he collided, or whether the BMW driver deliberately stopped suddenly to cause the collision.  Luckily the police officer only suffered soft tissue injuries and is recuperating at home.
Posted by ZMD at 10:56 AM