Some of you long time readers may remember my rant a few months ago about the harrowing, hair-raising, teeth-gnashing, nail-biting experience we had with buying a house in Southern California. With all the talk of a real estate depression we thought buying a nice house would be a piece of cake.  Instead the two month ordeal with trying to buy a short sale caused me to lose ten pounds and got me written up for my sour mood at work.  Ultimately we didn't get the house.  Then a miraculous event happened.  An even better property came on the market a couple of weeks later, just two blocks away from our lost house.  And this time we got it, after minimal fuss and no more hair or weight loss.  In fact I've gained back those ten pounds and then some.

Notice I said "property", not house.  The lost house was a newer and bigger house.  But our new house is on the "better" side of the neighborhood and has a much bigger lot.  It is the oldest and cheapest house in the best part of the neighborhood.  So now we have a remodeling project to attend to, which I was not anticipating when we set out to buy real estate. 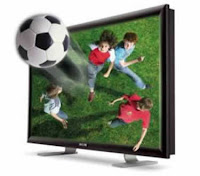 But a nice thing about remodeling is that we get to upgrade the house with the latest equipment, from kitchen appliances to light fixtures, to, get ready, a NEW HOME THEATER SYSTEM. I'm so psyched.  With the success of Avatar, there is a whole slew of new TV's with 3D capability coming on the market.  While I normally don't buy first generation electronic equipment (I waited until the 3GS before buying my evil iPhone and I won't even touch an iPad until maybe the third generation if ever), the timing is such that equipping my new home theater with a 3D TV makes sense.  Why buy a new TV when it might be outdated as soon as next year if it doesn't have 3D?

I read through all the reviews of the models already on the market.  There's all this video jargon about ghosting and cross talk and other geek terms that made my eyes glaze over.  Then I traipsed to Best Buy to take a look for myself.  They had several models set up for 3D viewing.  The actual content available to watch in 3D was pretty minimal.  They had several 3D animated movies to watch, like Monsters vs. Aliens and Cloudy With A Chance Of Meatballs.  A Samsung model could convert any 2D programming into 3D on the fly so we watched some World Cup soccer in 3D.  That was kind of cool except the image appeared slightly distorted because of the artifical 3D created by computer.

The first set I tried was a Pioneer plasma.  The 3D glasses were nice looking. They fit surprisingly well over my regular glasses.  They also felt extremely light.  I don't know how my ears and nose would hold up after watching Avatar for 3 1/2 hours with two glasses on my face though.  The 3D screen was, um, interesting when you first put on the glasses.  It definitely is 3D.  Images do seem to pop out of the screen. The picture also stayed 3D even when not standing directly in front of the TV, something that some reviewers had criticized about.  But after a few minutes I could feel my eyes getting tired.  This was concerning.  I certainly don't want to spend this much money on a TV feature that causes eye strain.

So I moved on to the Samsung LCD.  The glasses were not as attractive but they were equally light and fitting.  The depth of the image didn't seem as impressive as the plasma.  Maybe it was because I saw the plasma first that gave me that important first impression.   But I also noticed that my eyes didn't hurt after watching the Samsung.  It felt very natural. Perhaps something about the LCD vs. plasma? Also the Samsung has the 2D to 3D conversion, something the Pioneer doesn't.  But when you turn on the 3D feature, the image becomes unwatchable for anyone without the glasses.  The TV screen shows overlapping split images in 3D mode. Everyone in the room will have to wear the glasses to watch TV or everybody splits up to their own rooms to watch their own programming.  They didn't have the Sony set up yet for 3D so that's something I'll have to go back and try later on.

We're still in the middle of our remodeling so I don't have to decide just yet.  Maybe I'll wait until Christmas to read more reviews as people gain experience with these new sets and see if the price drops a little bit.  Perhaps more companies will come out with 3D TVs and I'll have more choices.  Right now it's a wonderful problem to have.  I love my new house, my new neighborhood, and being a lucky member of the ROAD professions.
Posted by ZMD at 8:00 AM