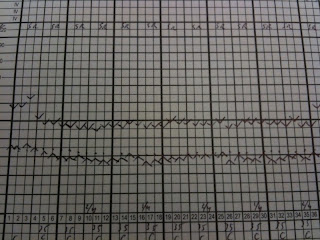 The above image is representative of what's commonly called "railroad tracks".  It is an anesthesia record where the vital signs are perfectly stable and unvarying during the case.  Vital signs like these are considered ideal as it shows the anesthesiologist was maintaining the patient's physiologic state despite the surgeon's attempt at causing great harm and pain to the body.

Rarely do patient's vital signs stay this even, no matter the interventions of the anesthesiologist.  When a surgeon makes an incision, the blood pressure and heart rate rise due to activation of the sympathetic nervous system, not because the patient is "awake" or "light".  During the operation any large amount of sudden bleeding may cause the BP to fall.  Manipulation of internal organs can make the vital signs flutter erratically.  So achieving railroad tracks on an anesthesia record is pretty uncommon.

Except that I've noticed ever since residency that some anesthesiologists fudge a little on their records. I've seen records of cases where the patient could become extremely unstable, such as an aortic aneurysm repair or cardiac bypass and the vital signs hardly deviate despite major physiologic changes during the case.  I used to think that, wow, this anesthesiologist must be excellent.

Then someone told me that records like this are another form of defensive medicine.  If there are any problems with the patient later on, such as an MI or stroke, the anesthesiologist can point to his record and say that there were no problems during the case; any perioperative complication must have occurred outside the OR, shifting the blame to the surgical staff.  If an anesthesiologist has to give deposition for a malpractice case, he can point to his record and tell the lawyer that the patient was perfectly fine while under his care.  Thus the anesthesiologist will try to extricate himself from any suit.

The beauty of this is that only the anesthesiologist is recording the vital signs in the operating room.  Everybody else is too busy with their assigned tasks to pay much attention to what's on the screen.  The anesthesiologist's recording is the last word on the patient's health during a case.  There is no audit system present.  Perhaps the advent of electronic record keeping in the OR will change all that.  Once it becomes wide spread it will be interesting to compare the electronic vs. manually recorded anesthesia records and see who really is an excellent anesthesiologist.
Posted by ZMD at 3:43 PM