Who Raised A Stink

One of our surgeons has a new fellow working with him.  The fellow is a nice enough chap.  Friendly demeanor, knowledgeable, a competent doctor.  But boy does he have bad body odor.  I'll be charting during a case and suddenly smell a horrendous stink. Bad as in I-haven't-smelled-anything-like-this-since-high-school-locker-room-after-football-practice bad.  Malodorous as a European in August inside a crowded subway.  Disgusting as a four day deep sea fishing trip without a shower.   I look up and it would be him. Ugh. 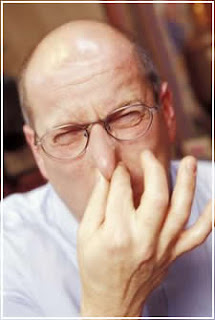 When he first started working, I couldn't quite place the origin of the smell.  Initially I attributed it to a stinky patient.  Don't we doctors always associate bad characterizations to patients (poor attitudes, poor compliance, poor reimbursements)?  But then I noticed that I would only get a whiff of that stink when the fellow was around.

He appeared to be well groomed.  He did enjoy sporting a 3 day old beard, which is common with young people these days (though I'm not sure what patients think about that).  I can't tell if his hair is deliberately greased down or whether he just has greasy hair.  His clothes are always clean and spotless.  But every time he walks into my room I have to start mouth breathing to keep from gagging.  It's worse than a poorly prepped colonoscopy.  Maybe not that bad but close.

I tried to bring this up with his attending.  I casually remarked that his fellow should probably take a bath every now and then.  He just laughed and didn't say anything.  Knowing the surgeon I think he would be too embarrassed to bring it up to the fellow.  Since I don't have the support of the attending the best I can do is hold my breath until this particularly fellow moves on to his next rotation.

I sure feel sorry for his patients though.  I couldn't imagine waking up every day to his odor hovering over my hospital bed. For the sake of his professional career I hope he gets some treatment for this.  And I hope he doesn't just try to cover it up with some strong cologne because that rarely works.  The mixture of cologne and B.O. is even more disgusting.
Posted by ZMD at 8:00 AM