Full disclosure: I own shares in BP

Shrieking headlines are proclaiming the end of marine life as we know it in the Gulf of Mexico.  "Giant Plumes of Oil Forming Under the Gulf," screams a New York Times article.  Researchers have found a large collection of oil near the site of the oil rig explosion that measures 10 miles long, 3 miles wide, and 300 feet deep.  One researcher cautions that oxygen levels near the spill have dropped 30%.  GASP!

Scientists seem to be surprised by the lack of evidence of the oil spill on the surface water and beaches.  The large plume on the ocean floor appears to answer that question.  But isn't this a good thing?  You would expect that in the frigid high pressure environment at the bottom of the ocean the oil would clump up and sink to the bottom.  Isn't this better than having it float up and contaminating all the fish and birds near the surface?  How much marine diversity could there be at the bottom of five thousand feet of water?  Some assorted odd creatures that may be lurking near this plume will get snuffed out.  But I doubt these are the kinds of fish people consume in the restaurants of New Orleans.  Other more nimble animals should be able to swim away from this area and find the other 615,000 square miles of the Gulf that are still unpolluted as hospitable as before.

If I've learned anything from all this, it is that the United States still has an enormous amount of oil just waiting to be accessed.  Imagine with all the talk of peak oil we can still dig a hole in this country, albeit a very deep hole, and oil will literally gush out of the ground unless properly controlled.  We are spending billions of defense dollars protecting our access to Mideast oil when we could use some of that money to drill for oil here.  No blood for oil?  Then maybe instead of sending our young men and women overseas we should train some of them in offshore drilling here and not worry about defending some Arabic governments who allows ten year girls to get married and raped and call that their culture heritage.

Finally I found this picture on the bottom quite amusing.  It is from the Los Angeles Times.  I guess nobody told the tourists in the background they needed to wear protective clothing before heading into the water.  Nice going clean up crew guys in the front.  Way to protect the public from this "disaster". 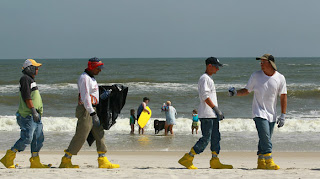