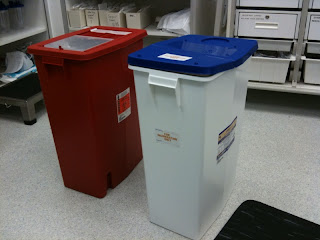 I think there are departments in our hospital whose only jobs are to come up with new rules and regulations to drive the rest of us working stiffs to insanity. Take for instance these two sharps boxes. Well one of them isn't really a sharps box. Can you tell which is which? According to the new rules, any syringes with unused drugs are supposed to go into the white box. But only the syringes. The needle on the syringe is supposed to go into the red box. Any drugs inside the syringe are supposed to be squirted out before being dropped into the white box. This is to prevent anybody from reaching into the sharps box and stealing leftover narcotics. Now the simple act of disposing of a dirty syringe that should take about half a second involves multiple steps and the handling of dirty needles. There are even people who come into the operating room to make sure the boxes have the proper contents in them. Can anybody say FUBAR?
Posted by ZMD at 12:10 PM